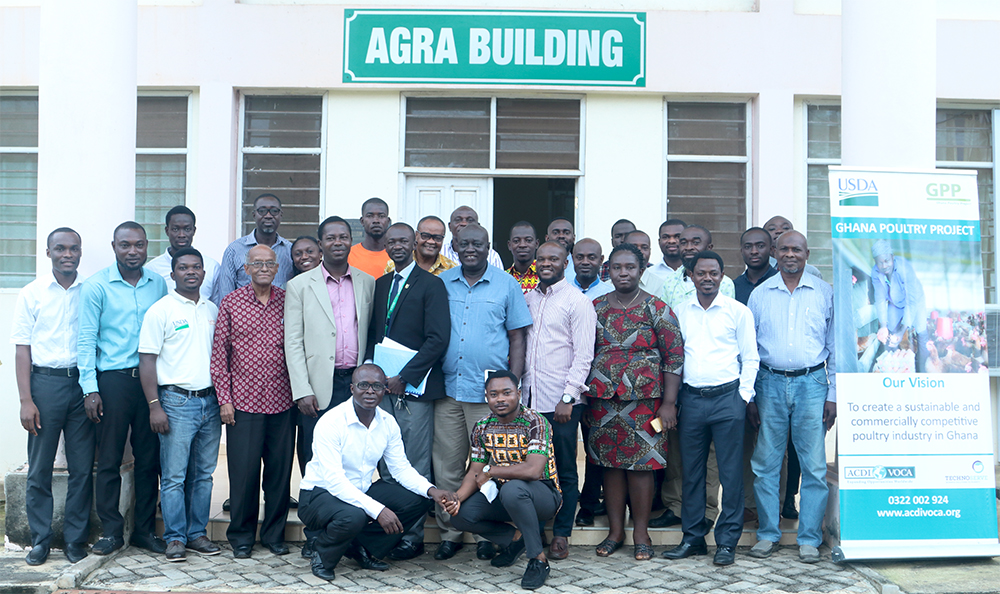 The Department of Animal Science of the Kwame Nkrumah University of Science and Technology (KNUST) in collaboration with the Ghana Poultry Project (GPP) has organised a training Workshop for stakeholders in the poultry industry.

The five-day workshop had about fifty participants drawn from the Ghana National Poultry Farmers Association (GNPFA), the Ghana Hatchery Association (GHA), the Veterinary Services Directorate (VSD), Animal Production Directorate of the Ministry of Food and Agriculture (MoFA), Animal Research Institute and other Universities in the country. According to the organisers, the programme is to stimulate the revival of the poultry industry to support the Government of Ghana’s flagship project ‘Planting for Food and Jobs’.

Representing the Dean of the Faculty of Agriculture, Dr. Chris Antwi, said the Department of Animal Science has over the years offered quality training to institutions, groups and individuals for capacity building, sale of animals and animal products among others.

He stated that the hatchery sector of the poultry industry has performed at low capacities for the past two decades in Ghana, with locational capacities being less than 30% of installed capacity. Survey has revealed that only eight hatcheries are operating actively in the country. According to him, there are small scale or mushroom hatcheries operating under unapproved practices in various places in Ghana. Dr. Antwi added that most personnel of these outfits and even well-established ones, have low relevant training leading to low hatchability. Farmers have therefore become over reliant on imported day-old chicks, resulting in the high cost of poultry production.

According to him, the training therefore would go a long way to help improve the skills of stakeholders especially in hatchery operation. He thanked the GPP for the financial support in the training.

Chairman of the GNPFA, Mr. Victor Oppong Adjei, said the Association as the apex body of the poultry industry recognises the importance of day-old chicks to the success of the sector.

‘Day-old chicks are very important as far as poultry is concerned. If you have good day-old chicks, you have over 70% success rate even if farm management practices are not good. Poultry is a multimillion industry and could change the economy if given the necessary attention’.

He said if the poultry industry is valued and financially supported could create more than the estimated one million jobs in the Planting for Food and Jobs Programme.

According to Mr. Oppong Adjei over 360,000 day-old chicks were imported into the country last year, which means that the country can save about Three Hundred Million Cedis if the industry receives the necessary attention.

A Representative from the GPP, Mr. Richard Enu said the training project, which started in 2015, is expected to end in September 2019. He said the GPP has collaborated with the universities in its operations. In all these, GPP seeks to build a competitive poultry value chain of which the hatchery business is very critical. Over the years, trainings have focused on capacity building.