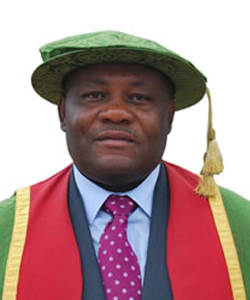 Professor Samuel Nii Odai is a Professor of Hydraulics and Water Resources. He is a fellow of the Ghana Academy of Arts and Sciences, a fellow of the Ghana Institution of Engineers and a distinguished Commonwealth Academic Fellow. He is also the recipient of the prestigious National Best Research Scientist Gold Award for water, environment and sanitation.

Professor Odai was born in Tema where he attended the Twedaase Primary (the first primary school in Tema) and Middle Schools. He had his General Certificate Examination (GCE) Ordinary and the Advanced Levels at the Koforidua Secondary Technical School. He did his National Service at the Tema Technical Institute as a science and math teacher.

Professor Odai studied one-year Chinese language at the Beijing Languages Institute (now Beijing Languages University) and proceeded to the Hohai (River and Sea) University where he graduated with BEng in Irrigation and Water Conservancy Engineering (in Civil Engineering), all under Chinese Government Scholarship. He returned to Ghana and had his national service at the Irrigation Development Authority head office in Accra. He obtained his MSc in 1996 and PhD in 1999, specialising in the area of computational hydraulics at the Tokyo University of Agriculture and Technology under Japanese Government Scholarship (MOMBUSHO).

In the same year he obtained his PhD (1999), he was appointed a lecturer in the Department of Civil Engineering of the Kwame Nkrumah University of Science and Technology (KNUST), then promoted to senior lecturer in 2002, to Associate Professor in 2007 and to Full Professor in 2012. Between 2005 and 2006, Professor Odai spent six months at the Imperial College London, researching on rainfall-runoff modelling, for his Commonwealth Academic fellowship.

As a water resources engineer with expertise in computational hydraulics, his work spans the areas of Open Channel Hydraulics, Urban Drainage and Flood Management, Applied Hydrology, Integrated Water Resources Management, and Water Supply and Environmental Sanitation. He has researched into several areas of concern in water resources, including the development of two efficient approximate models (the Burgers’ Equation Model and the Nonlinear Kinematic-Wave Model) for simulating water flow in open channels. He is a Fellow of the African Scientific Institute, and holds memberships in the International Association of Hydraulic Research, the American Society of Civil Engineers, and the International Association of Hydrological Science.

Prof Odai has been actively involved in attracting several major grants to the university. He worked with colleagues to obtain a Dutch Government grant to start the MSc programme in water resources engineering and management in 2004. In 2011, he worked with other colleagues and obtained a German Government grant to establish the Climate Change and Land Use Centre for training professionals at the PhD level from the West African region. In 2013, he worked with a team to win a World Bank funding to establish a regional water and environmental sanitation centre of excellence for West Africa.

Professor Odai has served in several capacities in the University including Examinations Officer of the School of Engineering (now College of Engineering), Deputy Manager of the Water Supply and Environmental Sanitation Project, later becoming manager of the Water Resource and Environmental Sanitation Project. He is the founding Director of the WASCAL Programme in Climate Change and Land Use entre. He is the International Director of the UK-based Wellcome Trust-sponsored project under the theme “Scientists Networked for Outcomes in Water and Sanitation” (SNOWS). He has served as the Hostel Tutor of the Steven Paris Hostel (postgraduate facility) and later as the Hostel Master. He served as Editor of the KNUST Journal of Science and Technology and rose to become the Editor-in-Chief. He was the Head of the KNUST Quality Assurance and Planning Unit. He was an advisory board member of the Ghana Institution of Engineers Journal. He has served on several University Committees.

Professor Odai has extensive international experience, including Visiting Professor of Integrated Water Resources Management at the Tokyo University of Agriculture and Technology; academic visitor at the UNESCO-IHE Institute for Water Education in Delft, The Netherlands, a visiting academic on British Council sponsorship to the University of Newcastle, a visiting lecturer to the National University of Rwanda 2002 and 2003, a visiting fellow at the Water and Environmental Management Research Centre of the University of Bristol, a member of the Advisory Board for the African Regional Conference for Engineering Education, and a Technical Committee member of the UNESCO-IHE Partnership for Water Education and Research (PoWER). He has been consultant for DANIDA, IUCN, and worked for UNESCO-IHE in facilitating workshops in Zimbabwe and trainings in Indonesia and Ghana.

Prof Odai has been graciously elected twice (2012 and 2014) as the Pro Vice-Chancellor of KNUST by his colleagues. Prof Odai enjoys motivating and mentoring the next generation through public speaking. He has had the opportunity to speak at conferences in Ghana and other African countries.

Prof Odai is a Christian, and worships with the Calvary Charismatic Centre (CCC), Kumasi, where he is a Sunday School Teacher and a marriage counsellor. Professor Odai is married to Maurin and they are blessed with three children: one daughter – Marveline, and two sons – Adriel and Rophel.