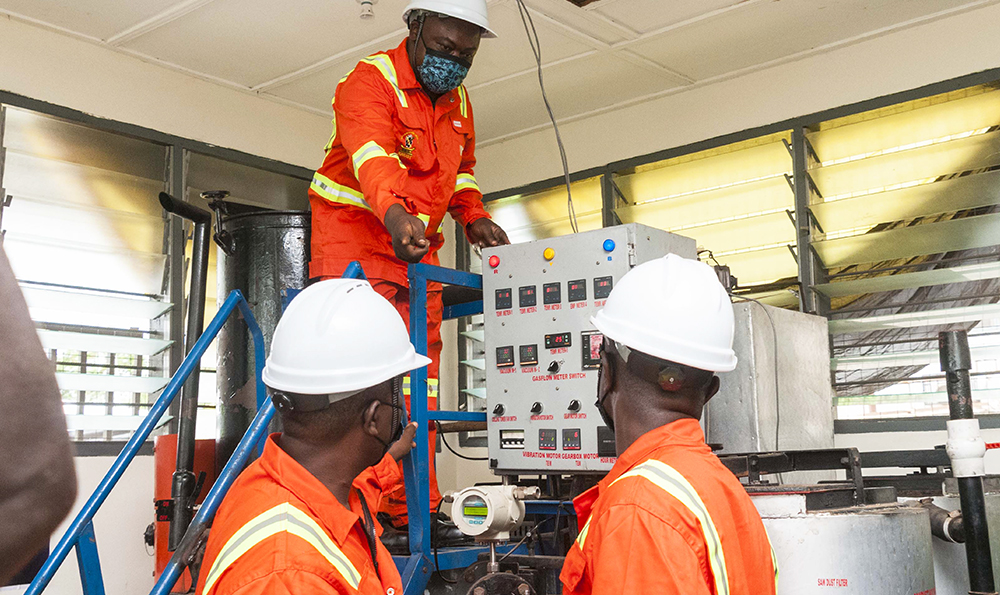 Speaking at the commissioning, the Principal Investigator of the KNUST Team of the Project, Dr. Mrs. Eunice Akyereko Adjei said, the project aimed to assess the viability of utilising the vast cocoa pod husks (CPH) into an integrated bio-rural energy scheme at cocoa farming communities in Ghana for poverty alleviation. She stressed that, one of the key objectives of the project was to set up an experimental prototype (B-Laboratory) for CPH-fed power generation system as the basis for implementing full-scale bio-energy systems for the cocoa growing communities in addition to research and development.

Dr. Mrs. Akyereko Adjei, noted that, the project, which commenced in 2018 sought to augment government’s effort at improving rural electrification. She said this became very paramount because significant percentage of the useful CPH generated at the cocoa farming communities were being allowed to go waste. The preliminary studies in 2017, showed that, about 30 percent of the CPH generated is used for soaps, fertilizers and sometimes fuel for cooking, whiles the remaining 70 percent is left to decompose and generate harmful emissions. She observed that since there are more rural communities without electricity, Ghana can convert the majority of CPH which are left to decompose leading to harmful emissions into the environment to a useful product to augment rural electrification and increase access of electricity to all.

Dr. Mrs. Akyereko Adjei further explained that the project, was in four thematic areas: characterisation (thermo-chemical analysis) of CPH and energy conversion technology, roll-out framework with stakeholders, experimental prototype and socio-economic assessment. The experimental prototype was executed using equipment purchased from India and United Kingdom for the installation of 5kW power plant, whiles the thermo-chemical analysis of CPH was conducted in the United Kingdom due to unavailability of the needed equipment in Ghana as of that time.

The Principal Investigator believes that, the experimental prototype could be replicated in rural areas if funds are made available for training local artisans on the technology development and local fabrication of the equipment. She called for more support in this regard to sustain the aim of the project.

Professor Ellis Owusu-Dabo said as a Science and Technology University, the institution should work towards energy self-sufficiency to the extent that it can wean itself off the national grid. He stated that, the commissioning of this bio-energy plant that generates 5kW to power the Graduate Students Reading Room is a laudable effort worthy of commendation. He charged the investigators of the project to work harder to replicate and expand its scope so that the University can become energy self-sufficient and supply power to its neighbouring communities in a not-too-distant future.

The Dean of the Faculty of Mechanical and Chemical Engineering, Professor George Yaw Obeng who represented the Provost of the College of Engineering affirmed that, biomass (feedstock) sources of energy abound in Ghana. He stated that the College would explore other similar resources that can be harnessed into useful energy for efficient utilisation and upscaling.