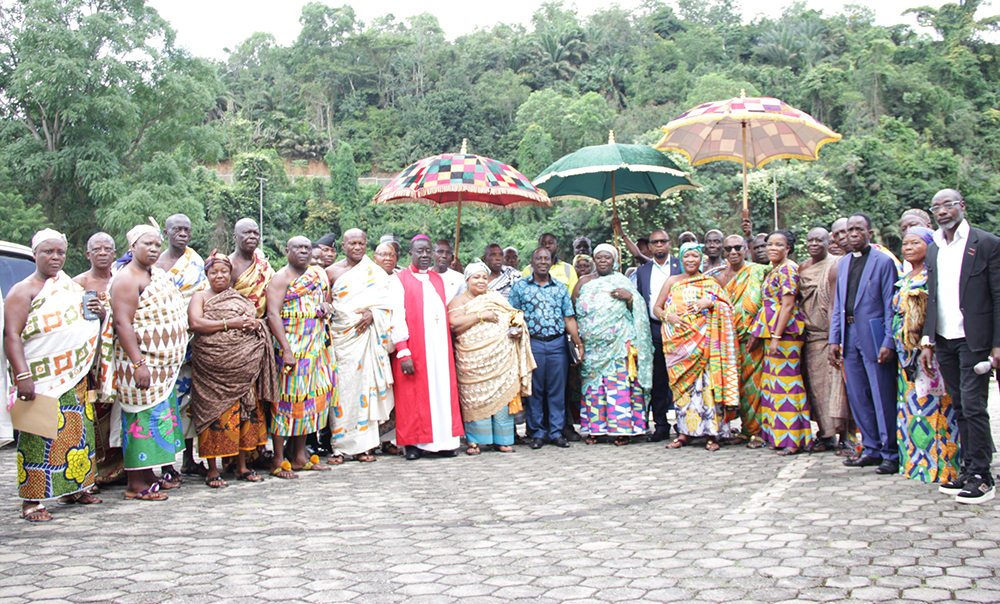 The management of Kwame Nkrumah University of Science and Technology (KNUST) in conjunction with AngloGold Ashanti (AGA) Ghana and Obuasi Municipal Assembly on Thursday, 11th September 2019 held a stakeholders’ forum to update opinion leaders ahead of the official opening of Obuasi Campus.

The Representative of AGA, Mr. Edmund Oduro, briefing the gathering on the setting up of the campus, said in the early months of 2019, the government of Ghana officially approved the proposal submitted by AGA to convert the Toy Town offices and residential units into a University College. He mentioned that, KNUST agreed to partner the Obuasi Municipal Assembly and AGA towards the establishment of the University Campus.

He noted that as enshrined in the asset relinquishment plan, the approved facilities were to be utilised by KNUST and hence approval resulted into fruition of the Obuasi Campus.

In his address, the Dean of the Obuasi Campus, Professor Richard A. Boamah thanked the Municipal Assembly and AGA for choosing KNUST out of the Universities in Ghana. He mentioned that even though the institution has started off with some selected Engineering and Business Administration programmes, they hope that the KNUST would run the same programmes of the Main Campus in the few years ahead. Professor Richard A. Boamah further promised KNUST’s commitment to ensure quality teaching and learning on the Obuasi Campus.

The University Relations Officer, KNUST, Dr. Daniel Norris Bekoe on his part, used the opportunity to outline some benefits that the University will bring to the people. According to Dr. Bekoe, the establishment of universities in any town changes the socio-economic status of the people of that community. He was hopeful the setting of the satellite Campus would create the needed jobs for the indigenes and also boost economic activities within the Obuasi Municipality and its environs. He charged the constituents of the Obuasi Municipality to support the fresh students in terms of their security.

He announced that, the students’ population which currently starts with about 500, is likely to double next year when the expected huge number of the first batch of Free Senior High School students graduate.

He, therefore, urged the business community to begin exploring opportunities of investing in hostel facilities to accommodate the anticipated larger number of students.

The District Superintendent of Police, Joseph Okrah, assured the gathering that the Police has put in place adequate security measures to ensure the safety and life of students, staff and properties of the university.

Class of 1982 Donates Furniture to the University Primary