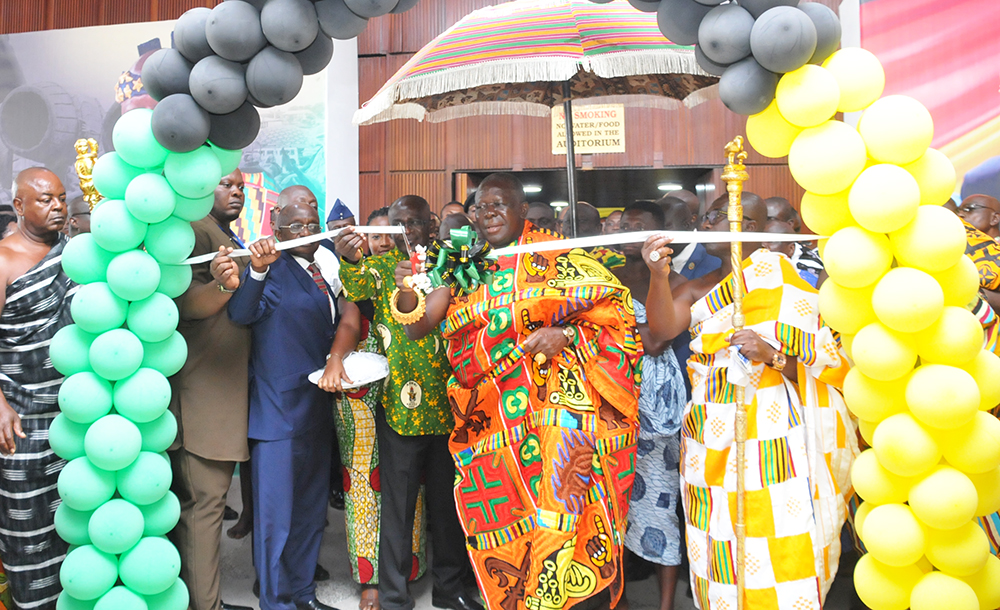 A dedicated week of activities to mark the 20th Anniversary celebration of the ascension of the Chancellor, His Royal Majesty, Otumfuo Osei Tutu II, unto the Golden Stool and to celebrate his successes for the Kwame Nkrumah University of Science and Technology (KNUST), Asanteman and the nation has officially been opened.

The weeklong celebration is under the theme: ‘Promoting Culture, Innovation and Technology: 20 Years of Otumfuo’s Dynamism’.

The University officially opened the celebration with an exhibition mounted by all the Colleges in the University, featuring inventions and research output of faculty and students. Earlier, the Chancellor inspected a parade mounted in his honour by the Joint Cadet Corps of the University.

In his opening remarks, Chairman of the Governing Council of KNUST, Nana Effah-Apenteng, said the Asantehene is worth celebrating by the University as his 20 years reign has seen tremendous milestones and achievements.

Nana Effah-Apenteng stated that Otumfuo’s reign has seen achievements such as the Otumfuo Education Fund, which supports the less privileged in society. He noted that the Chancellor eschewed negative ethnicity and through his multifaceted actions, speeches and prudent counsel to all and sundry, given credence to the belief that leadership should be seen as a privilege to make the lives of others better.

The Chancellor, Otumfuo Osei Tutu II, in his remarks stated that the university and Manhyia has collaborated over the years. Inducted as Chancellor of the University on 25th March, 2006, he has worked with four Vice-Chancellors and together with the Council and Management moved the University to unparalled heights as one of the best science and technology on the globe.

According to the Chancellor, the celebration is essentially a wakeup call on traditional rulers all over Ghana to work with governments to ensure continuity and improve the socio-economic livelihood of the people within communities and Ghana as a whole.

On his part, the anniversary marks the dawn of a new beginning in Ashanti to tap into opportunities in line with government programmes, working in partnership with corporate Ghana to venture into sectors that will generate economic benefits for Asanteman in particular and Ghana in general. In conclusion, the Asantehene thanked the University for the honour done him.

Professor Kwasi Obiri-Danso, giving highlights of activities lined up to celebrate the 20th anniversary of the Chancellor, said the week will see events such as Exhibition, Colloquium, Chancellor’s Cup Football Match, ‘Abankosem Night, the Asante Food Fair and the Chancellor’s Day.

In another development, a Colloquium themed: ‘Asante in the League of Nations’ was also held in honour of the Chancellor organised by the Royal Society for Asante History and Culture in conjunction with the Department of History and Political Studies, KNUST. The Colloquium featured Most Rev. Peter Kwasi Sarpong, Emeritus Archbishop of Kumasi Catholic Archdiocese, Professor Kofi Agyekum, Professor of Linguistics, University of Ghana, Legon, Professor Wilhemina Donkor, Former President Garden City University College and Former Head of Department of History and Political Studies, KNUST and Mr. Kwasi Arhin, Lawyer and Historian as discussants, and Professor Kwesi Prempeh as Chairman for the occasion.