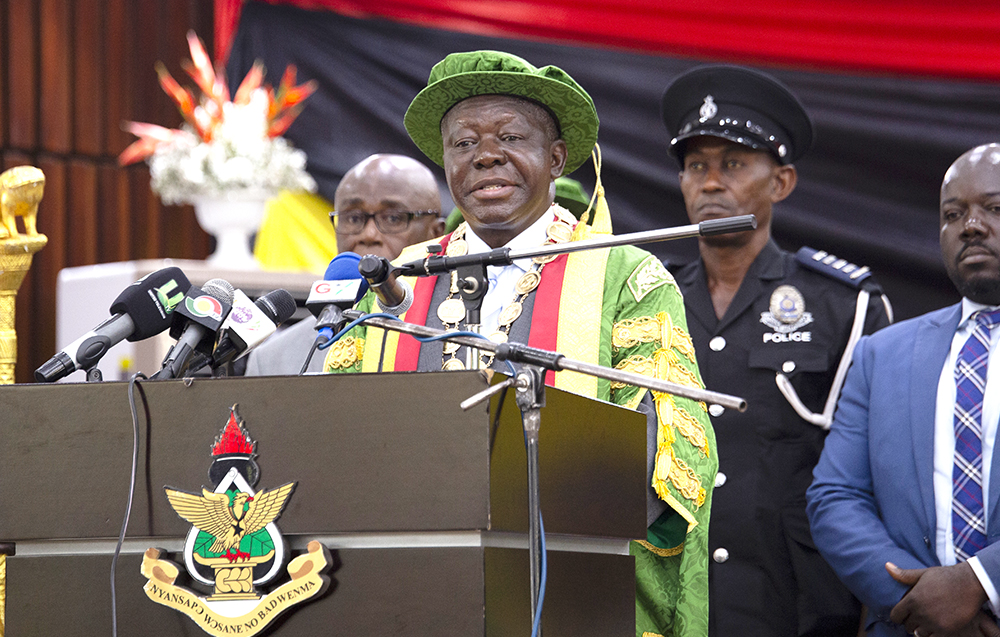 The Chancellor of the Kwame Nkrumah University of Science and Technology, Kumasi (KNUST), His Royal Majesty Otumfuo Osei Tutu II, has reiterated his call for additional accommodation facilities for students. The Asantehene, appealed for more accommodation in his address at the 2019 Founders’ Day Special Congregation Ceremony.

He noted that about 22 private entities have contacted the University for the purpose of constructing additional students’ accommodation on campus. Unfortunately, not much action has been seen in terms of actual construction work. ‘As stakeholders there is the urgent need to engage in a dispassionate discourse on the best way to provide residential accommodation on campus before the next academic year to accommodate graduates of the Free Senior High School’ he added.

Otumfuo Osei Tutu II commended government for giving clearance to recruit additional staff. He, however, advocated on the need for government to place the University in a special category and to grant it a special dispensation taking into consideration the role of the university in national development. In this light, he bemoaned the unfavourable lower ratio of staff to students in the University and called on government to give further clearance for recruitment. He further explained that with over 60,000 students, 99 academic departments, 18 faculties, coupled with the establishment of another campus in Obuasi, and Centres across the country, mentoring of about 18 nursing training institutions and 5 colleges of education, the current staff strength is woefully inadequate to cater for all these expansionary works.

The Chancellor also announced that the Committee he instituted to investigate the student disturbances last year, has submitted its report, which he has studied and commended the Justice Rose Owusu Committee for the thorough work done. The Chancellor hinted that he would forward the report to the University Council but will engage in consultation with the stakeholders of the University on the way forward.

He reassured the general public that the University remains committed to providing a safe and secured academic environment conducive for undertaking relevant research, quality teaching, entrepreneurship training and community engagement.

In his address, the Vice-Chancellor, Professor Kwasi Obiri-Danso, revealed some of the recent remarkable collaborations of the University. He revealed that the ASSESS Participating Agency Service Agreement (PASA) between USAID and KNUST, through the Bureau of Integrated Rural Development (BIRD), College of Agriculture and Natural Resources was expected to end in March, 2019. In the third quarter of FY19, the ASSESS PASA was granted a non-cost extension from March 13, 2019 to December 31, 2020. Subsequent to this, and based on a performance assessment of the project, USAID has agreed to extend the project for another 3 years ending in December, 2023 to enable KNUST utilise the remaining grant of 9 million United States Dollars on the project.

According to the Vice-Chancellor, the Faculty of Agriculture, through Prof. Banful and his team made up of Dr. Christopher Antwi and Prof. J. A. Bakang, is making a significant stride towards youth economic empowerment and job creation in Ghana through a contract worth 2.64million USD with ENI Ghana dubbed “OKUAFO PA PROJECT”.

Per this contract, KNUST is training as many as 800 youth in agribusiness enterprise development at ENI Ghana’s state-of-the-art training facility at Kyeremasu in the Dormaa East District. This would afford the trainees the opportunity to establish their own business enterprises along the agricultural value chain.

In another development, Agri Impact Consult, has also secured funding from the Ghana Exim Bank to establish ten (10) Greenhouses of 640sqm each on the KNUST campus. This project is aimed at reducing graduate unemployment in the country and increase the production of vegetables. He said with these facilities in place, interested students can be engaged to work while studying and will also whet students’ appetite for agriculture and entrepreneurship.

Professor Obiri-Danso also stated that the Gambia Technical Training Institute (GTTI) was selected as a Centre of Excellence to be transformed into a University of Science, Engineering and Technology (USET) under the Africa Higher Education Centres of Excellence (ACE) Project Steering Committee (PSC). In furtherance of this cause, KNUST was selected as a mentor institution among other top worldwide Universities to mentor the University of Science, Engineering and Technology (USET), Gambia.

He also revealed that KNUST has won the Phase II of the Mastercard Foundation Scholars Program worth Fifty-One Million, One Hundred and Forty-Six Thousand, Four Hundred and Fifty-One United States Dollars ($51,146,451) to train One Thousand, Five Hundred (1,500) scholars for the next ten (10) years. The first intake of 200 scholars for the phase II will be in the 2020/2021 academic year.

The Vice-Chancellor concluded by thanking the benefactors of the University. He expressed his gratitude to the Church of Pentecost, the Consolidated Bank Ghana (CBG), Republic Bank, the Governor, the Board and the entire Management of the Bank of Ghana for their financial support to the University in diverse ways.

The Chancellor and Management also conferred on Professor Malcolm Donald Mcleod, a distinguished scholar of African studies a Doctor of Letters honorary degree(D.Litt) for his contributions to the development of the world through his works and for lecturing at the 11th R. P. Baffour Memorial Lectures.

In a related development, the Chancellor commissioned the phase I of the Regional Water and Sanitation building as well as the first phase of the KNUST Business School Postgraduate building which will add additional classroom spaces to our existing numbers. The second phase of projects will be commissioned in 2020.

In all a total of 3,442 students were presented at this year’s special congregation. Out of this number, 879 were conferred with undergraduate degrees, while 2,563 received graduate degrees, out of which 51 were awarded with terminal degrees.