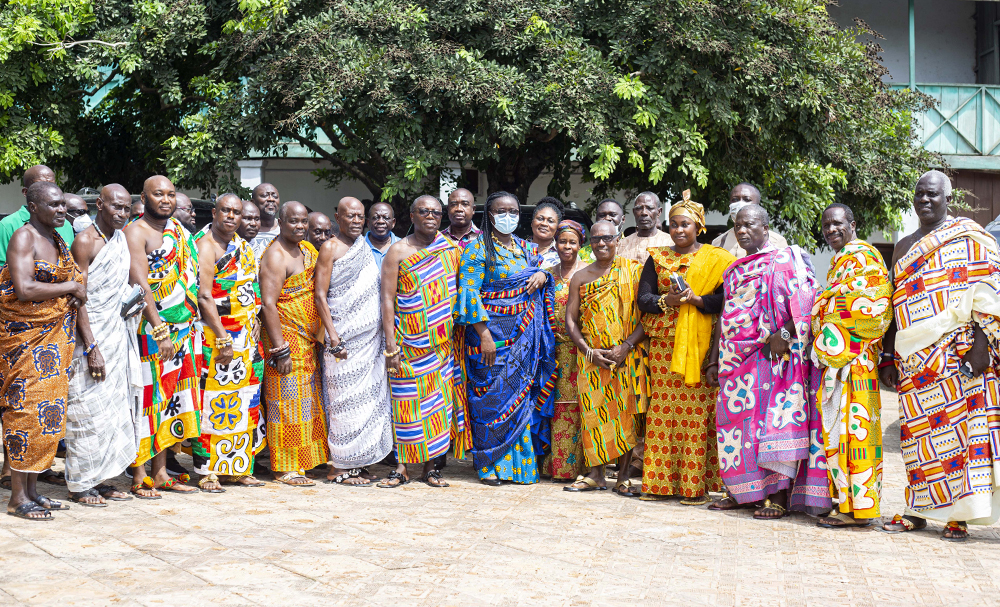 The Management of Kwame Nkrumah University of Science and Technology, (KNUST) has paid a courtesy call on the Chiefs of Asebu Traditional Area in the Central Region of Ghana on Friday 11th February 2022. The goal of the visit was to express gratitude to the chiefs for the provision of land for the establishment of the KNUST-Moree Executive Campus’.

KNUST and the Asebu/Nkusukum Traditional Council signed a memorandum of understanding (MoU) in August 2014, and the first sod was cut for the construction of a state-of-the-art Executive Campus and Research Centre. The first phase of the Moree Campus opened in July 2016 with facilities comprising eight lecture theatres, a conference room, a beach recreation area, an outdoor bar, and a restaurant.

Management of KNUST in the form of appreciation, presented fifty thousand Ghana Cedis (Gh₵50,000), 40 cartons of soft drinks, a carton of Schnapps and whiskey to the chiefs of the Traditional Area. As a corporate social obligation, KNUST provided a clinic, a laboratory, two nurses quarters, and 15 laptops to the two surrounding communities that gave the land for the establishment of the Executive Campus. With government assistance, the KNUST is constructing a road network from the Moree intersection to the Campus.

Professor Okatakyi Amenfi VII, the Paramount Chief of the Asebu Traditional Council, received KNUST’s package on behalf of the chiefs and elders. He praised the University Management for their generosity. He further expressed his gratitude for the University's various corporate social responsibilities executed within the Tradition Area. He urged Management to operationalise the Facility in earnest to benefit the communities through jobs especially for the youth. The Vice-Chancellor was given a chieftaincy title by the chiefs of the Traditional Area, Nana Adesuahemaa I of Asebu Traditional Council, to express their appreciation.

Professor (Mrs.) Rita Akosua Dickson, the Vice-Chancellor, conveyed her heartfelt gratitude to the chiefs for welcoming KNUST into their society. She also congratulated them for the tremendous community support the Institution had received since the project began in 2014. She emphasized the University's enormous effect on Ghana, Africa, and globally, stating that this recognition is reflected in its rating as Ghana's number one institution and Africa's 12th top University. She noted that Management's goal is to be among the top five institutions of higher learning on the African continent, and she thanked the chiefs for collaborating with the best.

She also announced that the Campus, designed as an educational resort will be operating by March 2022, thanks to a committee led by Professor Joshua Ayarkwa. When fully functioning, the facility, according to the Vice-Chancellor, will be a suitable location for all University retreats by Colleges and Departments. It will also host short programmes for all Ghanaian ministries and departments, corporate organizations, ministers, and members of parliament from Ghana and other African countries.