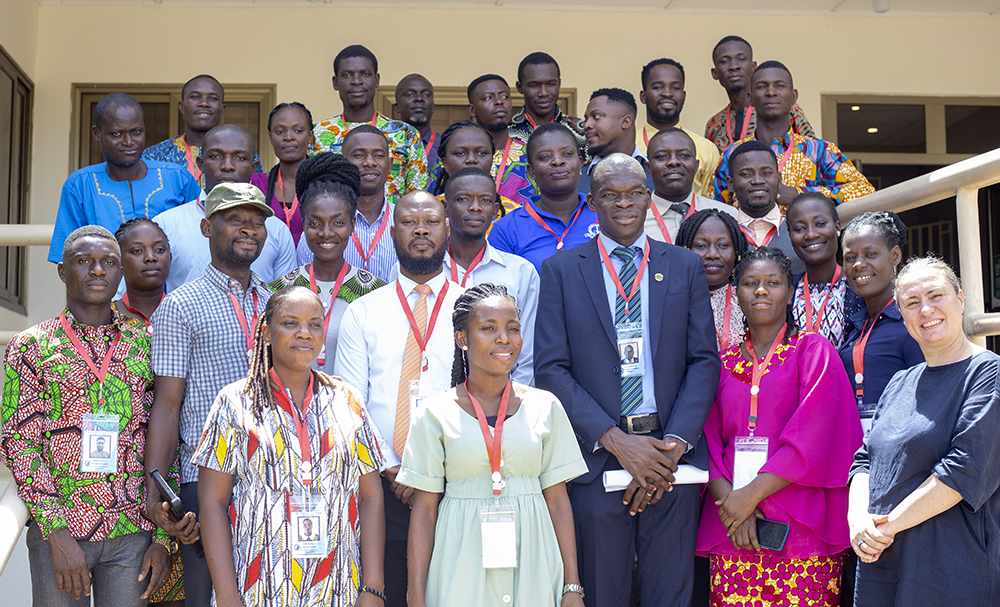 Centre for Disability and Rehabilitation Studies of the Kwame Nkrumah University of Science and Technology (KNUST) together with the Ghana National Association of the Deaf (GNAD), has organised the maiden edition of the GNAD-KNUST Training of Trainers Workshop on 19th April, 2022 for Ghanaian Sign Language (GhSL) Instructors.

The two-week workshop was aimed at supporting 29 participants from various universities, colleges, schools for the deaf, hearing schools, private institutions, and regional sign language centres to acquire the skills and knowledge necessary to lead and provide qualified training in GhSL to people who want to learn GhSL. The GhSL curriculum was also presented during the Workshop, so attendees could learn how to implement it to promote standardised Sign Language teaching in their regions.

The Ghana National Association of the Deaf (GNAD) is a non-partisan, non-religious, not-for-profit membership organisation established in 1968. GNAD's core objectives include advocacy, and the association represents the voices of nearly 500,000 deaf people in Ghana. GNAD has since, for the past 54 years, advocated for equality for deaf people.

The Executive Director for GNAD, Mr. Juventus Duorinaah, speaking at the opening ceremony of the workshop, revealed that GNAD, for the past years, has seen growing interest in issues about Ghanaian Sign Language (GhSL) and Deaf people's Human rights which has led to many achievements in the realization of rights, opportunities, and increased emphasis on non-discrimination.

According to Mr. Duorinaah, almost all the public universities and colleges in Ghana currently engage Sign Language Interpreters (SLIs) to ensure that deaf students can have equal opportunities in these institutions. Also, the Ministry of Education (MOE) has approved the 3rd edition of the GhSL Dictionary and encouraged its usage in basic schools. Again, through a partnership with the Ministry of Health and Ghana Health Services, the teaching of basic Sign Language is being taught in all nurses and midwifery schools in Ghana.

He further recognized and lauded the efforts of the Danish Deaf Association (DDL) and the KNUST team led by the Provost of the College of Health Science for their support of GNAD. “Thank you for the financial support and for welcoming us and making facilities available for us. It is our sincere hope that this partnership will grow strong and strong.”

Mr. Duorinaah encouraged the participants to make good use of the training and to ensure that they use the knowledge effectively to promote effective GhSL teaching in the country.

The Provost of the College of Health Science, Professor Christian Agyare, indicated that language, irrespective of its nature, is an indispensable tool for human communication and separates humans from animals. Thus, breaking the language barrier should be a public concern.

He disclosed that KNUST, in taking a leadership role and fulfilling one of its core values, Leadership in Innovation and Technology, became the first public university in Ghana to include Ghanaian Sign Language as a mandatory course, in the curricula of academic programmes in the College of Health Sciences. “One of the goals of KNUST’s effort is to ensure that healthcare practitioners are able to communicate health information effectively with their deaf clients with the help of an interpreter,” he said.

Professor Anthony Kwaku Edusei, Chairman of the opening ceremony, addressed the growing interest of many institutions, especially academic institutions, to incorporate the learning of GhSL into their programmes.  “There is no standardised curriculum to facilitate the teaching and learning of the GhSL for institutions that want to adopt the usage of GhSL. It is, however, the hope that this maiden training program will fill the gap by helping GHSL instructors acquire knowledge and skills on how to use the most standard and approved teaching and learning materials for teaching GhSL” he stated.