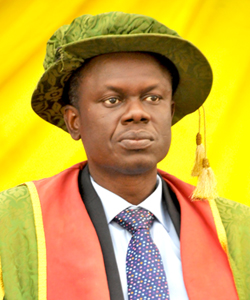 Mr. A.K. Boateng joined the service of KNUST in October 1999 as an Assistant Registrar and has risen through the ranks becoming a Deputy Registrar (General Administration and Human Resource Development); Foundation Registrar, College of Science; Head of KNUST Accra Office, Coordinator KNUST IDL centre in Accra before he eventually ascended the high office as the 10th Registrar of the Kwame Nkrumah University of Science and Technology (KNUST), Kumasi.  He is the Foundation Registrar of the University of Energy and Natural Resources (UENR).

In 2010, he was appointed by the President of the Republic of Ghana to serve as Secretary to the Presidential Committee on Emoluments for Article 71 Office Holders.   Mr. Boateng has also served either as Secretary or Chairman to high-profile executive search committees for the appointment of Vice-Chancellors and Registrars in the tertiary education landscape. He is also an external assessor to the Registrar’s Offices of a number of universities and technical universities. He is a strong team player, a versatile university administrator whose extensive experience and affable leadership style have helped in promoting the mandate of the University and projecting KNUST to be among the comity of ivy league universities in Africa.

As Registrar of the University, Mr. Boateng has attended/participated in several workshops/seminars on Higher Education Institution operation and management both local and abroad.  Mr. Boateng has a number of publications and memoranda to his credit.