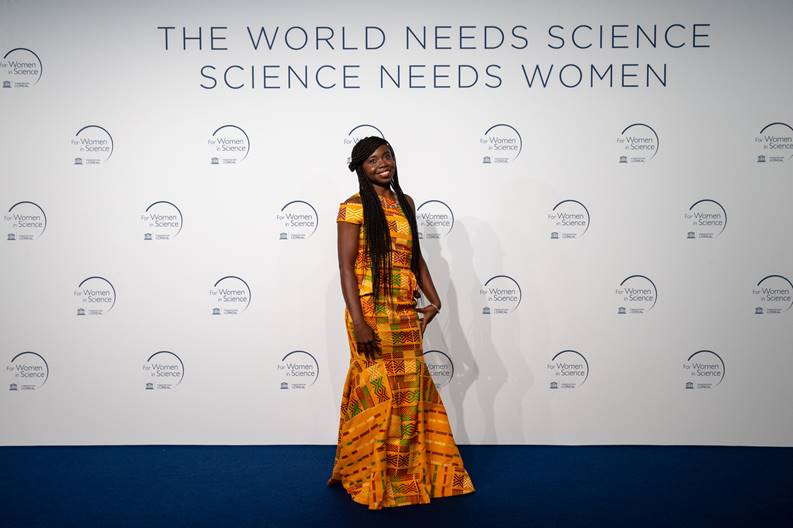 Dr Priscilla Kolibea Mante of the Department of Pharmacology has won the L’Oreal-UNESCO For Women in Science International Rising Talent Award in Paris, France. The award ceremony which took place at the UNESCO headquarters, recognized her for exploring the anticonvulsant activity of the plant alkaloid cryptolepine and its solid-lipid nanoparticles in the management of neurocysticercosis-induced epilepsy.

Dr. Mante who is the only African among 15 receipients of the award, in 2018, received one of two L'Oréal-UNESCO For Women in Science Sub-Saharan Africa post-doctoral fellowships.  The programme recognised 14 fellows, 12 doctoral and 2 post-doctoral – from five countries in sub-Saharan Africa (Ghana, Mauritius, Kenya, South Africa and Nigeria). They were selected for the scientific excellence of their work from more than 480 applicants, by a jury of independent experts.

By identifying a way to help cryptolepine permeate more efficiently into the central nervous system, the risk of convulsion should be reduced, helping the patient to manage their condition as effectively as possible. “It’s very rewarding to know that my research could significantly alter complicated structures like the brain and positively affect people’s lives”, she said.

Dr. Priscilla Kolibea Mante believes the biggest challenge for women in science is managing negative perceptions of ambition in women and overcoming gender stereotypes. Having faith in the future, she is convinced that her generation has been fortunate to receive strong support, and believe women can tap into that and spearhead their careers to higher levels. “The world will make room for us”, she says. “The more women push for senior roles, the harder it will be to ignore them.” The expert guidance of both men and women throughout her career has been so important that Dr. Priscilla Kolibea Mante now considers herself a “champion” of mentorship, regularly supporting younger scientists in pursuing their dreams. She concludes: “Sometimes it’s important to hold your mentee’s hand and guide them towards opportunities they never knew existed.”

Five outstanding Laureates, one from each continent, were also honoured for their significant contribution to science. These exceptional women were recognised for the excellence of their research in the fields of material science, mathematics and computer science and they will each receive €100,000.

Since 1998, the L’Oréal Foundation, in partnership with UNESCO, has worked to improve the representation of women in scientific careers, remaining strong in our conviction that the world needs science, and science needs women. In its first 21 years, the For Women in Science programme supported and raised the profile of 107 laureates and more than 3,000 talented young scientists, both doctoral and post-doctoral candidates, providing research fellowships, allocated annually in 117 countries.