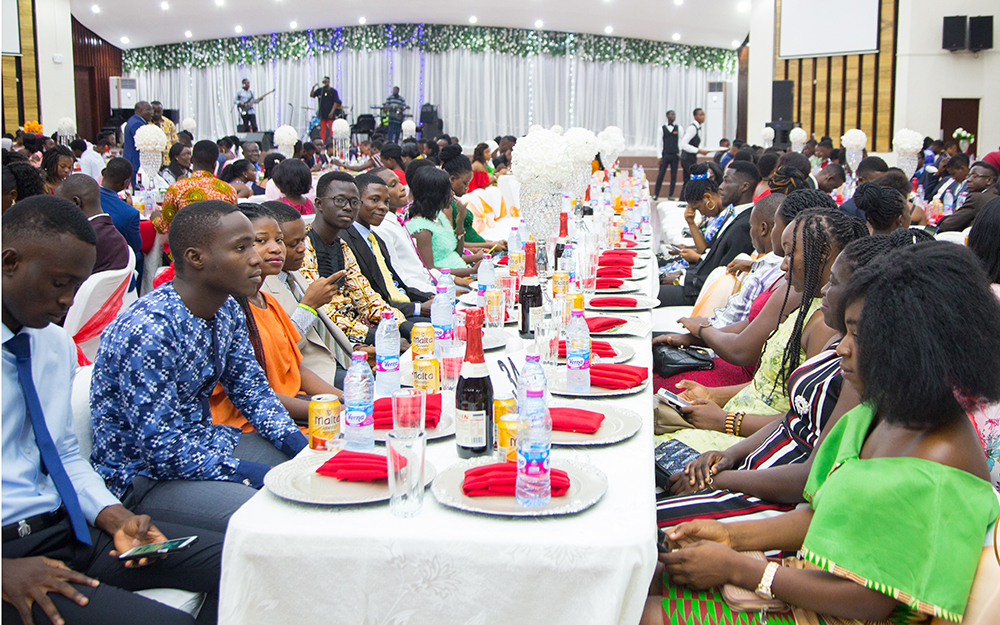 One hundred and fifty (150) new Scholars comprising one hundred and forty Ghanaians and ten international students on the Mastercard Foundation Scholars Program (MCFSP) at the Kwame Nkrumah University of Science and Technology (KNUST) have been formally introduced to management of the University at this year’s Vice-Chancellor’s reception for the scholars.

The reception, which took place at the Great Hall of the KNUST is mandatory under the provisions of the Scholars Program. It affords newly admitted scholars, the opportunity to meet the Vice-Chancellor, the host of the evenings’ program and members of management to dine, network and interact with them.

Addressing the scholars, The Lead of the MCFSP-KNUST for the Vice Chancellor, Professor Kofi Owusu-Daaku, encouraged the scholars to be ambitious. Professor Owusu-Daaku stated that though, most of them are coming from deprived areas, their background does not matter as their new dispensation, coupled with hard work will enable them excel, transform themselves and to give back to their communities, which is the philosophy underpinning the Scholars Program.

He however, cautioned the scholars against any acts of misconduct saying that management would not hesitate to take them off the program. He also, announced plans to increase next year’s intake of scholars to about 200. He further revealed that the program in going forward would admit more females, students with different abilities and those from displaced countries and communities.

Professor Wilson Agyei Agyare, the Dean of Students, welcomed the Cohort Six scholars to the University and reiterated his Office’s commitment to their wellbeing. He encouraged the fresh scholars to look out for other students who may need any assistance and to inform him or refer their peers to his outfit to help address their challenges.

In a related development, the occasion was used to honour distinguished Scholars and Scholar Alumni on the Scholars Program. They were awarded in three different categories: Academics, Community Engagement Initiatives and Support Services/Active Participation of MCFSP-KNUST events.

The Community Engagement category saw Evans Dzorkpata and Nicholas Kofi Adegbe winning the category as Scholars and Celestina Ayatuure Azuure emerging as the winner in the Scholar Alumni category for their respective outstanding community engagement projects.

Joined by other scholars, the Cohort Six Scholars were treated to good food, music and drama.

The Mastercard Foundation Scholars Program which became operational in 2014 at the Kwame Nkrumah University of Science and Technology (KNUST) is a scholarship programme that provides academically talented yet economically disadvantaged young people in Ghana and Africa with access to quality and relevant secondary and tertiary education. The Scholars Program embodies an array of mentoring and cultural transition services to ensure the scholar’s academic success, community engagement and transition to employment opportunities which will further the goal of social and economic transformation of Africa.

Scholars also benefit from regular group meetings with other scholars that focus on personal and professional development opportunities and activities tailored to build societal relationships and scholars’ capacity.

At KNUST they have continued academic support through academic mentoring, virtual learning, life, and career coaching, and tutoring.

Opportunities to participate in leadership congresses, community services and mentoring (Go-back Give-Back), and uniquely sourced internships, among others.