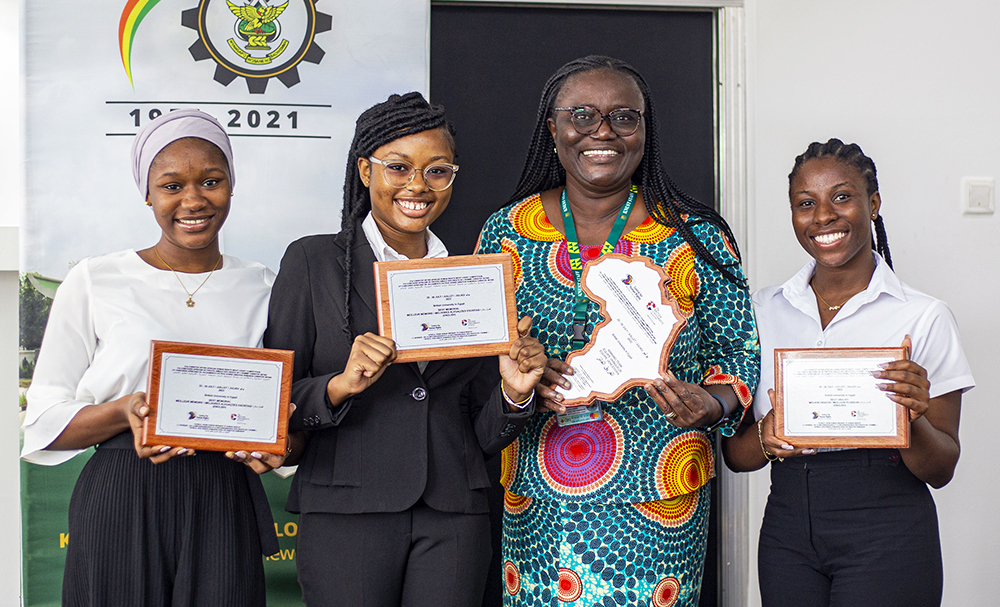 Following their victory at the just ended 31st Christof Heyns African Human Rights Moot Court Competition 2022 which was held in Cairo at The British University in Egypt, the KNUST Faculty of Law Team has presented their awards to the Vice-Chancellor, Professor (Mrs.) Rita Akosua Dickson on Monday, 8th August 2022 at the Council Chamber, KNUST.

Giving accounts of the event, the Dean of the Faculty of Law, Dr. Ernest Owusu-Dapaa noted that the Competition which featured fifty (50) law faculties across Africa, comprised thirty-eight (38) universities from Anglophone countries with KNUST, UG, and GIMPA Law schools representing Ghana. Others include six (6) law faculties from Francophone countries, four (4) from Arabophone countries, and two (2) from Lusophone countries participating. He said that the Competition's goal is to help aspiring lawyers cultivate skills in advocacy and have a deeper understanding of the African Human Rights system. This year's hypothetical case, he added, addressed climate change and human trafficking as well as the accountability of internet intermediaries.

Dr. Owusu-Dapaa emphasised that at the end of the Preliminary stage out of thirty-eight (38) English-Speaking institutions that participated, KNUST was adjudged the winner with 85.48% which automatically qualified KNUST to the Quarterfinal and Semi-final Stages defeating UG and GIMPA Law School. ‘In the Semi-Final stage, KNUST was the only Ghanaian University among other 8 Universities that remained in the competition. At the final stage, the qualified teams were shuffled and arranged into Applicants and Respondents to allow for multilingual submissions, where KNUST argued as a Respondent amongst other universities,’ he stressed.

He further mentioned that at the end of the submissions in the final round, KNUST was adjudged the ‘Overall Winner’ of the Competition. ‘This year’s victory is significant as no university in the history of Christof Heyns African Human Rights Moot Court Competition has ever won all aspects of the competition as KNUST. Also, with an all-female team representing the University since its participation in 2006, we are proud that this victory is remarkable at a time when the University is presided over by the first female Vice-Chancellor in the University’s history,’ he stated.

The KNUST team represented by Miss Afia Owusua Banahene, Miss Anita Enyonam Dei, and Miss Majida Issah Abah emerged as the “Overall Winner of the Competition,” “Overall Best Team in the Preliminary Rounds,” “First Best Oralist,” “Second Best Oralist,” “Best Written Memorial (Applicant & Respondent Submissions)” and Placed First in the Ranking of the thirty-eight (38)  English-Speaking Teams. He added that KNUST is set to host the 2023 edition of the competition in Kumasi, Ghana.

Professor (Mrs.) Rita Akosua Dickson expressed her excitement at the team's outstanding achievement and lauded the Dean, lecturers, and administrative staff of the faculty for their efforts to ensure the success of students and the Institution. ‘This is great news for management as we celebrate our 70th anniversary. We are therefore proud of the commitment that you have invested in bringing this historic success, she said. Professor Dickson commended the ladies for proudly representing the University and encouraged them to keep working hard to make themselves and KNUST proud. She charged the Dean and his team to work assiduously to bring home the awards in the 2023 edition of the competition.